Dicamba is a product that belongs to the herbicide group and widely used to destroy unwanted growth of broadleaf plants. It is available in the different salt and acid formulation. They act as plant hormones like auxins. Dicamba can be used on many woody plants and broadleaf weeds. Sometimes, dicamba is also used in well water but usually at lower levels so that it does not have any effect on the health of humans. It can have severe side-effects on direct exposure such as breathing problems, skin rashes, and dizziness.

Growing usage of dicamba in place of glyphosate due to its various beneficial properties is expected to propel the market growth of Dicamba. Glyphosate is widely used herbicides around the globe however due to rising crop resistance to glyphosate is compelling the farmers to switch to dicamba, thereby restricting the use of Glyphosate and in turn fueling the demand for dicamba. This factor is expected to augment the market growth of dicamba over the forecast period.

Increasing the export of dicamba herbicide from China is expected to foster the market growth of dicamba over the forecast period. According to the AgroNews, in August 2018, China's Dicamba TC exports amounted to 3,315 Tons, valued US$ 44.8 million. All the Dicamba products are exported to four countries. Among them, Dicamba 98% TC ranked first in exports which accounted for 96.7% in total value. Therefore, the growing export of dicamba herbicides from China is propelling market growth.

Regionally, Europe dominated the global Dicamba market in 2018, reporting 28% market share in terms of revenue, followed by North America and Asia-pacific, respectively. The growth of dicamba market is attributed to the technological advancements in the agriculture industry.

A concern associated with the drift damage caused due to vaporization and blanket spray of dicamba is projected to hinder the market growth. Drift damage can cause damage to neighboring farms due to spraying of dicamba which affects non-targeted crops and trees as dicamba is very corrosive and toxic in nature. Therefore, the aforementioned factor is expected to restrict the market growth of dicamba over the forecast period.

Pending regulatory approval for new dicamba formulations such as Mon 1661 from Monsanto and Engenia from BASF that used over dicamba-resistant soybean and cotton are still awaiting EPA approval. According to the Coherent Market Insights, Monsanto has also planned to launch new cotton varieties if EPA approves the new dicamba formulations. These pending regulations are major factor expected to hinder the growth of the dicamba market.

Growing regulatory approval from USDA and EPA for production and commercialization of dicamba herbicides is expected to provide immense growth opportunity to the market of dicamba. For instance, in March 2015, Nufarm Limited received EPA approval of the new seven-day preplant used for Spitfire. With this approval, Spitfire herbicide became the only dicamba product with an optional seven-day waiting interval between spraying and planting. Therefore, such rising approval for production of dicamba will favor the market growth

Growing investment in the production of dicamba by major players is projected to propel the market growth over the forecast period. For instance, in June 2015, Monsanto Co’s efforts to expand its agrichemical and plans to invest potentially more than US$ 1 billion in a production facility for an alternative herbicide, the weed-killing agent called dicamba. Therefore, growing such focus of manufacture to increase investment is stimulating market growth.

Increasing launch of innovation in dicamba herbicides by the manufacturer in order to meet the rising demand around the globe is expected to accelerate market growth. For instance, in June 2017, BASF SE has announced the launch of a new hormonal herbicide Atectra BV (dicamba diglycolamine salt) in Argentina, which is used to control resistant broadleaf weeds. The formulation of the product offer lowest volatility that is six times smaller than the traditional volatility already exists in the market.

The growing focus of manufacturers to increase production capacity of dicamba herbicide is projected to fuel the market growth over the forecast period. For instance, in March 2017, BASF SE has opened its expanded production facility for dicamba in Beaumont, Texas. The expansion supports the company’s strategy to increase the production volumes of dicamba, ensuring growers have access to the latest technologies for better weed management programs. 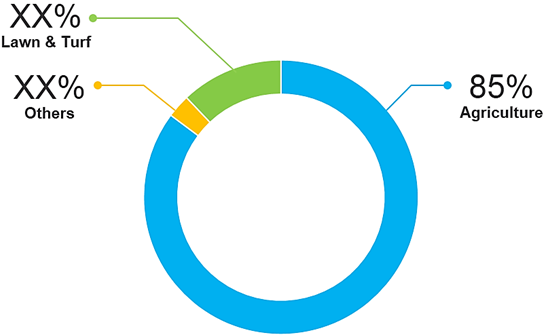 On the basis of application, in 2018, agriculture segment accounted the largest market share of 85% in terms of revenue, followed by lawn & turf and others, respectively. 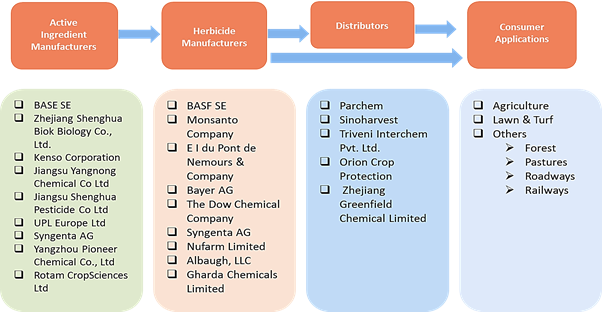 Dicamba is an herbicide which is used in croplands to control the growth of unwanted perennial weeds. It is a chemical compound which is a derivative of benzoic acid. Dicamba is widely used for both commercial and domestic plantations to reduce the crop loss due to the excessive growth of weeds. Dicamba finds its applications in variety of crops such as cereal & grain, fruit & vegetables, pulses, oil seeds and others.

The global dicamba market has witnessed a surge of growth in terms of revenue in recent past years, owing to the rising awareness regarding crop protection. In addition to this, the growing demand for safe and healthy food among consumers. Agriculture industry is facing a challenge to increase the production yields of crops in order to meet the rapid increase in demand for food products across the globe. Dicamba provides an eco-friendly alternative for toxic herbicides used in farms.

Manufacturers of agricultural chemicals and herbicides are focusing on encouraging farmers for using dicamba for efficient crop protection by educating them different crop care procedures. These modern agricultural methods are being practiced around the world by farmers in order to mitigate the crop damage. This scenario is expected to foster the growth of the market in the forthcoming years.

What are the growth estimates for the market till 2027?

The global dicamba market is estimated to reach US$ 700 million by the end of 2027 , in terms of revenue

Among regions, Europe held a dominant position in the 2018 , accounting for 28% market share in terms of revenue, followed by North America and Asia Pacific, respectively.

Agricultural biological is an ecological and organic agric...

Aquaculture is a technique of farming aquatic species such...

Transfluthrin is a pyrethroid insecticide with a short res...

Agrochemicals are chemical products that have been special...