Indonesia Infant Nutrition Market to Surpass US$ 9.90 Billion by 2028

Food is the primary source of important nutrients that the human body requires to function properly. Similarly, infants require sustenance for optimal development and growth, which is primarily obtained through breast milk. Breast milk can be replaced with infant nourishment. BPOM (The National Agency for Drug and Food Control of Indonesia) have updated the definition for food and food products in the Indonesia. BPOM is an Indonesian government agency tasked with safeguarding public health through regulation and oversight. According to BPOM, food is everything coming from biological resources and water, whether processed or not, designated as food or drink for human consumption, including food supplements, food raw materials, and other materials used in the process of preparation, processing, and/or production of food or beverage. Processed food is the food or beverage resulting from a process in a certain way or method with or without added ingredients. Functional food is processed food containing one functional component or more, which are based on scientific analysis and has certain physiological functions and is proved to be beneficial to health.

Marketing strategies adopted by infant nutrition product manufacturers in Indonesia are creating awareness about the importance of feeding specialty baby food and infant formulas. For instance, PT Frisian Flag Indonesia Company is engaged in conducting local contests and offers rewards for winners. For instance, in 2017 the winners of a company contest had their family message displayed on the packaging of sweetened condensed milk products Frisian Flag and each got a monthly supply of Frisian Flag milk products for a whole year. Also, 30 weekly winners were shown their message in Kompas newspaper and each will get the product package from Frisian Flag.

Increasing demand for organic food for babies is expected to fuel the Indonesia infant nutrition market growth. Modern farming techniques utilize chemical fertilizers, pesticides, and preservatives. The presence of these chemical contaminants in food has various short-term and long-term consequences on infant and child health. For instance, the preservative nitrite, is converted into carcinogenic compound nitrosamines, by the human body. Whereas, fresher and more nutritional food helps to boost the overall development of the infant, resulting in a strong and robust immune system.

The current legislation in Indonesia prohibits manufacturers and distributors from promoting and advertising formula milk for infants aged 6 months and below in health facilities. Also, healthcare facilities and healthcare workers are not permitted to sell, give, or promote the formula milk for infants. In addition, there are some limited restrictions on the labelling and advertising of milk products for infants below the age of 1 year. These regulations may negatively impact the infant nutrition market growth and pose as a major challenge for global and local manufacturers and raw material providers in Indonesia.

According to the Indonesian Food and Beverage Association’s (Gapmmi) study, Indonesia's food and beverages industry has been estimated conducted to exhibit significant growth of around 8.5 percent (y/y) in 2017. In addition, Indonesia is the most lucrative market for Foreign Direct Investment (FDI). According to Badan Koordinasi Penanaman Modal’s (BKPM) data, FDI in Indonesia's food and beverages industry accounted for US$ 1.5 Bn in 2015. The expansion of the food industry is thus expected to create opportunities for global and local key players to tap potential markets for dietary supplements, especially in emerging economies.

According to World Bank, Indonesia is the fourth-largest populous country in the world. For convenient services and attractive offers, stores including convenience and departmental stores, supermarkets, hypermarkets, etc. are ensuring the availability of different products under one roof. So for customers, it is easy to purchase of daily goods in large quantity. Stores, supermarkets, hypermarket etc. are already established trust among people is the key driver, expected to boost growth infant nutrition market over the forecast period. 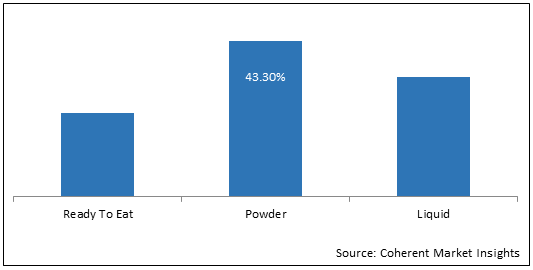 The rising number of the COVID–19 cases is expected to have a short-term negative impact on the nutrition sector's export-import trade. The nutrition segment's short-term impact is less pronounced; however, the negative impact of the COVID-19 on the global economy may have significant indirect effects on the nutrition market. For example, market participants and the government are heavily invested in ensuring the supply of essential nutrition and food. The majority of baby food manufacturers were found to be concentrating on increasing production to ensure availability.

Baby food was designated as an essential good during the COVID-19 pandemic, and as main retail distribution channels were allowed to remain open, stockpiling resulted in significant increases in retail sales. Although, the above-mentioned trend was seen in both developed and developing economies, the latter experienced slower growth due to supply chain disruption and consumers spending less during the economic downturn.

The infant nutrition product market is broadly classified as baby food and infant formula. Infant nutrition refers to the dietary requirements of infants. A diet that is deficient in essential calories, minerals, vitamins, or fluids is deemed insufficient. When compared to infant formula, breast milk provides the best nutrition during the crucial early months of growth. Infant nutrition necessitates the provision of essential nutrients that promote normal growth, development, and resistance to infections and diseases.

The increasing number of campaigns organized by the government, in association with private infant nutrition product manufacturers, to increase awareness about the importance of nutrition for babies is projected to boost the demand for infant nutrition products in Indonesia. For instance, the Global Alliance for Improved Nutrition (GAIN), in collaboration with the Directorate of Community Nutrition, Ministry of Health Indonesia, is engaged in a project to increase the sustainable improvement of Maternal, Infant and Young Child Nutrition (MIYCN) in East Java, Indonesia. Under this project, the Behavioral Change Intervention (BCI) to be implemented in East Java aims to improve the nutritional intake for children aged 24 months and below from low-income families by providing them with baby food products.

The demand for convenient baby food has increased among consumers as a result of growing awareness about the complete nutritional needs of growing babies, met by infant nutrition. Furthermore, rising urbanisation in Indonesia, combined with an increase in the number of women in the workforce, is expected to propel the infant nutrition market forward.

What is the Indonesia infant nutrition current market size and compound annual growth rate (CAGR) of the market during the forecast period (2021-2028)?

Indonesia infant nutrition market is estimated to be valued at US$ 6.10 Billion in terms of revenue in 2021.

Increasing awareness about the importance of feeding specialty baby food and infant formulas and demand for organic baby food are expected to drive the market growth.

Which is the leading segment in the market?

Among formulation, powder is the leading segment in Indonesia infant nutrition market and accounted for 43.30% share in 2020.

Some limited restrictions on the labelling and advertising of milk products for infants below the age of one year are hindering the market growth.