Chocolate is a typically sweet, usually brown comfort food prepared from cocoa tree in the form of blocks, liquid, or paste. Chocolate is used as flavoring ingredients in several foodstuffs, such as chocolate brownies, cakes, chocolate cookies, bars, and candies. The main ingredient cocoa provides phytochemicals, which is an antioxidant. The content of phytochemicals is high in dark chocolates. Chocolate increases serotonin levels in the brain and the gut and improves immune system.

The increasing awareness of health benefits associated with chocolate is major factor propelling growth of the chocolate market. Consuming chocolate offers health benefits such as blood pressure suppressing property, antioxidant enrichment, and anti-aging. Furthermore, increasing demand for chocolate and chocolate-base products on seasonal and festival occasion significantly contributes to growth of the chocolate market. High demand for chocolate in confectionery market further fuels growth of the market. For instance, according to Coherent Market Insights’ analysis, the confectionery market is expected to witness CAGR of 3.8% during the forecast period of 2017 - 2025.

Europe led the chocolate market and is expected to grow at CAGR of 4.6% during the forecast period, 2017-2025. It is expected to be valued at US$ 43.20 billion by 2025. According to National Confectionary Association (NCA), Germany led one-fourth of the Western European in sales and consumption in 2016. North America is the second largest chocolate market with the U.S being major economy in the region. It has the highest consumption of chocolate and presence of international players such as Mars, Mondelez, etc. Asia Pacific is the fastest growing region in chocolate market, owing to the growth of multinational companies in the region such as Mars, Hershey’s, Ferrero, and Ghirardelli. Also, high consumption of chocolate by growing population is propelling the demand for the growth of chocolate market over the forecast period.

By price range, economy range chocolate has the highest demand. During festivals such as Christmas, Easter, and Diwali demand for economy range and mid-range chocolate is high due to large population of low-income economy. According to World Bank PovcalNet Database, around 56% of global population is low-income and around 13% is middle-income population. Among products type, molded bars have the highest shares and it was valued at US$ 35.34 billion in 2016. 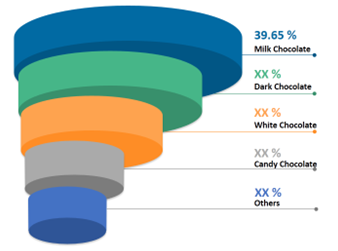 According to the International Cocoa Organization, the net sales of the Mars Inc. was at the peak in 2016 with US$ 18000 Million followed by, Mondelez International with US$ 12,900 Million.

Major Players in the Chocolate Market:

Chocolate is regarded as one of the highly profitable components and is denoted as a multibillion-dollar market, which is expected to conquer new levels over the forecast period. It is a type of sweet mainly prepared from cacao seeds, which are roasted and ground. Amount of cacao added while preparing decides the different variety of chocolates to be produced. It has also made its way in vast number of food items, such as cookies, cakes, brownies, pudding, mouse, hot and cold beverages, and various other dishes with increase in demand and innovation. As taste is the major preference among the consumers, companies are focusing on making a product that is accepted worldwide.

Major drivers propelling the growth of chocolate market includes wide range of application such as flavored food items and confectionary products. Milk chocolates dominates the flavored chocolate market, followed by dark chocolate. According to coherent market insights, global milk chocolate market is valued US$ 39.49 billion in 2016. Rising awareness about the health benefits of dark chocolate, such as potential cancer prevention, improved heart health, maintaining cholesterol level, and high antioxidant level is expected to boost the growth of chocolate market over the forecast period. According to National Center for Biotechnology Information (NCBI), cocoa chocolate has cancer protective properties along with it is strong antioxidant effects with a pleasurable eating experience.

What are the growth estimates for chocolate market till 2025?

Which are the prominent chocolate market players across the globe?

Which segment based on flavor, accounted for the highest demand in the chocolate market?

What are the key factors driving growth of the chocolate market?

Increasing awareness of health benefits associated with chocolate is one of the major factors that is expected to propel growth of the market over the forecast period.

What is the Compound Annual Growth Rate (CAGR) of the chocolate market for next 8 years?

The global chocolate market is estimated to exhibit a CAGR of 6.6% over the forecast period.

Which region is dominating the chocolate market growth?

Among regions, Europe held dominant position in the chocolate market in 2016, and is expected to exhibit a CAGR of 4.6% during the forecast period.

The crystallized form of sugar syrup known as candy has been gaining high demand all over the globe and espe...