North America Toxicology Laboratories Market to Surpass US$ 317.1 Million by 2027

North America toxicology laboratories market is estimated to account for US$ 317.1 Mn in terms of value by the end of 2027

Moreover, availability of cost effective toxicity testing methods is also expected to propel growth of the market. The use of conventional methods such as immunoassay and mass spectrometry in laboratory toxicity testing is more cost-effective over advanced methods such as Polymerase Chain Reaction (PCR), high-performance liquid chromatography (HPLC), and others. For instance, the cost of a single sample test (urine or blood) may vary between US$ 10 and US$ 50 per sample. However, toxicity testing through advanced methods could cost around US$ 100-US$ 150 per sample. 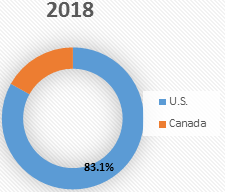 Increasing expenditure by the government agencies on toxicity testing to control consumption of illegal drugs is expected to offer lucrative growth opportunities for players in North America toxicology laboratories market. For instance, in December 2019, The Florida Department of Health announced that US$ 650,000 in legislatively-appropriated funds was awarded to four Florida universities for new project to test humans for health risks from toxic blue-green algae on Treasure Coast.

Moreover, integration of toxicology results with cloud computing technologies is also expected to boost growth of the market. The test results obtained from the forensic sample contain confidential information that needs to be circulated across various authorities. Such confidential results are interpreted and stored in toxicology library with the help of cloud storage technologies. Presently, there is minimal adoption of such cloud competing technologies in the toxicology testing industry. However, these technologies hold lucrative growth opportunities in the market in the near future, owing to increasing number of samples tested for abusive consumption.

Amphetamines segment in North America toxicology laboratories market was valued at US$ 33.3 Mn in 2018 and is expected to reach US$ 92.9 Mn by 2027 at a CAGR of 11.4% during the forecast period.

The market is also witnessing several partnership and collaboration activities among key players. For instance, in June 2019, Draper collaborated with Bristol-Myers Squibb to develop a unique liver tissue model for screening the toxicity of drugs.

Key players in the market are focused on expanding services to enhance their market share. For instance, in January 2020, Agilent Technologies Inc. announced the latest implementation of its mutual compatibility philosophy through which joint customers of Agilent Technologies and Thermo Fisher Scientific can choose a chromatography data system from either company—Agilent OpenLab CDS or Thermo Fisher Chromeleon—to control analytical instruments from both organizations.

Key players in the market are also focused on product approval and launch to expand their product portfolio. For instance, in April 2019, Bio-Rad Laboratories, Inc. received 510(k) clearance from the U.S. Food and Drug Administration (FDA) for Bio-Rad’s IH-500, an automated random access system for blood typing and screening.

Toxicology testing refers to the identification and characterization of toxicity of drugs which can have adverse effect and help in guiding individual patient during the course of treatment. Toxicology testing laboratories perform diagnosis of numerous controlled substances for excessive consumption with the help of suspect samples such as urine, hair, blood, and oral fluids.