Press Release: Release Liners Market to Surpass US$ 20.4 Billion by 2027

Release liners is also called a carrier or backing paper, it is used to carry or hold onto the sticky substrate until it is ready to release. It can be paper-based, film-based, and poly-coated-paper based or even contain unique substrate such as metalized films as their base. Release liner substrate is mostly coated with silicone that enables whatever the liner is carrying to release when the time is right. They are widely used across medical applications such as metalized papers/films as their base. Industrial application of liners covers weatherproofing, roofing shingles, and insulation products.

Rising demand for an industrial label that plays an important role in the overall packaging industry and in the supply chain of a product is primarily fueling the market growth of release liners. According to the Coherent Market Insights, around 51% of the global release liners market is in pressure-sensitive label-stock application followed by tapes application. Also, expanding end-user industry across developing regions such as Asia Pacific, Europe, North America, and Latin America is further anticipated to foster the market growth of release liners.

Rising consumption of packaged food owing to its advantage such as ready-to-eat option, instant cooking, and convenience of eating is fueling the demand for release liners in food &beverage industry, which in turn is expected to support the market growth. Expanding cosmetic, pharmaceutical, automotive, and personal care product industry in developing regions is further anticipated to foster the market growth of the release liners.

Rising technological advancements by manufacturers to develop next-generation release liners is anticipated to fuel the market growth of release over the forecast timeframe. For instance, in October 2017, Twin Rivers introduced the next generation of Alliance Release, a base paper used in the production of silicone-coated release liners. Hence, increasing technological advancement coupled with the emerging application is projected to accelerate the market growth of release liners.

Increase in expansion of production facilities in order to meet the rising demand for release liners is anticipated to foster the market growth of release liners. For instance, in July 2018, ITASA, a producer of silicone liners, has announced the opening of a new construction facility for silicone paper and film production in Querétaro, Mexico. The new plant will serve the entire continent. This step will enable the company to position itself with greater guarantees and accessibility in the emerging release liners market.

Emerging liner-less labels &UV curable silicon products are gaining popularity due to its advanced composition which is driving their demand across the beverage industry is expected to augment the market growth of release liners. This trend has been observed across South America, Europe, and most recently in the U.S. Therefore, rising usage of liner-less labels across the beverage industry is presumed to foster the market growth over the forecast period.

Rising trend of digitalization across various industries because it is one of the most preferred printing methods for most of the applications is forecast to augment the market growth of release liners. Moreover, digitalization has encouraged the manufacturer of release liner to offer efficient and effective labeling solutions by a decrease in run-length, which in turn reducing overall operational costs and generating higher revenue. Hence, the rising adoption of digitalization around the globe is expected to foster market growth. 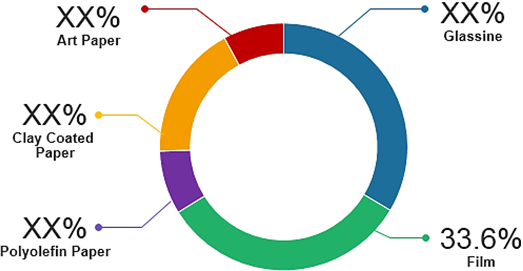 On the basis of substrates, in 2018, film accounted the largest market share of 33.6% in terms of revenue, followed by glassine and clay coated paper, respectively.

Release liners are a type of film sheet which avoids the sticky surface from premature adhering. It act as carrier for the sticky substrate until it is ready to be applied. They can be prepared from coating substrates by polyethylene, polyvinyl chloride and others. Release liners find their application in various kinds of industries such as pharmaceutical, personal care & cosmetics, food & beverage, automotive, printing, electronics and others.

On the basis of Substrates, the global release liners market is segmented into film, glassine, polyolefin paper, clay coated paper and art paper. Film substrate segment showed a substantial market share in the market owing to its physical and chemical properties such as transparency, water resistance, and easy distortion. These factors are anticipated to fuel the demand for release liners in upcoming years.

What are the growth estimates for the release liners market till 2027?

The global release liners market is estimated to reach US$ 20.4 billion by the end of 2027, in terms of revenue.

Which are the prominent release liners market players across the globe?

What are the key factors hampering growth of the release liners market?

What are the key factors hampering growth of the release liners market?

What are the key factors driving growth of the release liners market?

Rising consumption of packaged food, owing to its advantage such as ready-to-eat option, instant cooking, and convenience of eating is one of the major factors that is expected to propel growth of the market over the forecast period.

What is the Compound Annual Growth Rate (CAGR) of the release liners market for next 8 years?

Which region held the largest market share in the release liners market?

Among regions, Asia Pacific held a dominant position in the global release liners market in 2018, accounting for 32.0% market share, in terms of revenue, followed by North America and Europe, respectively.

Self-heating food packaging is a packaging, which has the ability to heat food without any external heat or power. Thi...

Fruit packaging is of utmost importance, which ensures that fruits are protected from mechanical damages and adverse c...

Paper and board are made from natural fibers which are recyclable. Carton boxes are effective packaging solution, whic...

Packaging printing is defined as a label which might be graphical, written or electronic representation on the package...