Waxing is one of the most common methods used to remove the hair however it is a little painful and costly as compared to shaving. Electric shavers, such as epilators and trimmers are gaining huge demand across the globe as they are saving lots of recurring purchases are completely painless. Shavers are also gaining demand among women for shaving the legs and armpits. They are durable, easy to use, and are affordable. They can be classified into cartridge, disposable, and electric. They can be easily available across supermarkets & hypermarkets, convenience stores, and online. Out of which, the online channel is one of the fastest-growing channels as it helps the manufacturer to reach their product to the targeted consumer and are also affordable as compared to other distribution channels such as retails stores.

Advancement in technology such as the launch of electric shavers is expected to foster market growth over the forecast timeframe. For instance, in September 2019, Manchester United and Remington have collaborated to launch a co-branded product range. The exclusive range includes both grooming and hair styling products, complete with club colors and the legendary Manchester United crest. It includes electric shavers, beard trimmers, hairdryers, clippers, and styles.

Growing celebrity endorsements by shaver manufacturers in order to promote their products through electronic and print media is expected to augment market growth. Many renowned celebrities, such as film stars and athletes, are highly engaged in endorsing various brands of shavers which is increasing the visibility and acceptability of shaver products among consumers. Hence, growing celebrity endorsement is projected to accelerate market growth.

On the basis of the region, Latin America dominated the global Shavers market in 2018, accounting for 31% share in terms of value, followed by Europe and North America.

Low adoption of shaver's by women across developing countries such as Asia, Africa, and Latin America less concerned about personal grooming as compared to developed countries is expected to hinder the market growth. According to the Coherent Market Insights analysis, in Japan, 56.2% of approximately 1,000 women in Japan aged 20 years – 69 years did not remove body hair. This is expected to restrict market growth.

Electric shavers are painful on ling hair and can leads to small nicks on the skin such as razor bumps and acne. This is expected to restrict the adoption of shavers. Also, they need to be handle with care. All these factors are projected to hamper the market growth of shavers over the forecast period.

Electric shavers have potential opportunities in developing countries due to rapid urbanization and growing disposable income in developing countries of Asia Pacific, Latin America, and Africa. This is increasing their spending on high-end grooming products, which is expected to foster market growth in the near future. According to the CEIC Data, India’s Households: Gross Disposable Income data was reported at 131,525,002.483 INR million in Mar 2018. This records an increase from the previous number of 119,566,177.097 INR million for Mar 2017.

The growing working women population is projected to provide a significant market opportunity for the shavers market. According to the data from Catalyst, in India, women’s labor force participation rate has fallen from 30.4% in 1990 to 23.4% in 2019. In the United States, 57.1% of women were in the labor force in 2018, compared to 69.1% of all men. Moreover, In Australia, women’s labor force participation rate stood at 61.1% in 2019.

The growing trend of body hair removal such as shaving their legs, armpits, and chest is projected to fuel the demand for shavers which in turn propelling the market growth. Shaving affordable as well as painless as compared to waxing which is further driving demand for electric and non-electric shavers as they are comfortable to remove hair from private body parts. This is expected to foster market growth.

Growing demand for female razors due to the expanding population of working women around the globe is projected to augment the market growth of shaver. For instance, in February 2015, Energizer Holdings, Inc. launched Schick Hydro Silk Trimstyle – a hybrid razor for women, which is the part razor and part bikini trimmer. Hence, the rising introduction of the female razor is projected to accelerate market growth. 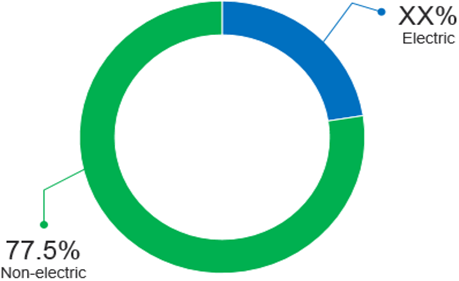 On the basis of the product type in 2018, the non-electric segment has accounted the largest market share of 77.5% in terms of value, followed by electric.

Waxing is one of the most common methods used to remove the hair however it is a little painful and costly as compared to shaving. Shaver is basically categorized as a razor that is used to remove the hair without any pain. They can be classified into cartridge, disposable, and electric shaves include epilators and trimmers which are more in demand due to their advanced and easy to use features.

What are the major growth driving factors for the global shavers market during the forecast period?

Increasing demand for the non-electric shavers from the middle-class population coupled with the demand for shavers among male consumers across the globe.

Which type of product type segment and region dominates the global shavers market?

What are the segments considered in the Asia Pacific halal cosmetic?

Shavers market has been segmented by product type, by end-user and by distribution channel.

Who are the prominent players in the global shavers market?

Which region can dominate the global shavers market?

Latin America is the largest among the regions.