Press Release: South East Asia Beverage and Wine Coolers Market is Expected to Exhibit a CAGR of 5.1% during the Forecast Period (2020-2027)

South East Asia Beverage and Wine Coolers Market is Expected to Exhibit a CAGR of 5.1% during the Forecast Period (2020-2027)

South East Asia beverage and wine coolers market has been impacted significantly by COVID-19, in terms of supply as well as demand. During Covid, the demand for wine coolers decreased due to uncertain job losses and upraised unemployment. For instance, according to a report published by the United Nations Sustainable Development Group, in Indonesia and Philippines, unemployment raised by  2.5% and 1.2% respectively in 2020. Moreover, the coronavirus pandemic affected the industries on many aspects including massive slowing of the supply chain, flight cancellations, closure of restaurants, travel bans and quarantines, falling business confidence, and growing panic among the population. This poised a noteworthy impact on South East Asia beverage and wine coolers market.

Indonesia is expected to hold dominant position in the South East Asia Beverage and Wine Coolers market during the forecast period.

Indonesia held a dominant position in the South East Asia beverage and wine coolers market in 2019, accounting for 43.8% share in terms of value, followed by Vietnam and Philippines. 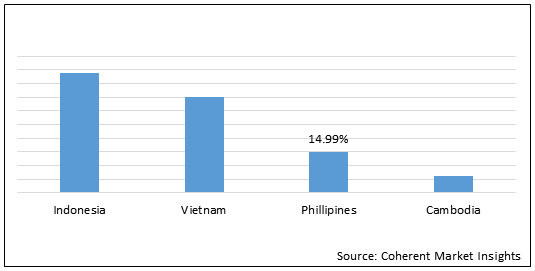 Indonesia held dominant position in the South East Asia beverage and wine coolers market in 2019 and is estimated to retain its dominance throughout the forecast period. Indonesia is one of the most populated country in the South East Asia region.  The population of the Indonesia accounted for 267.7 Million in 2018, according to the World Bank data. In addition to this, the GDP per capita income of Indonesia is increasing at a rapid pace. For instance, GDP per capita income of Indonesia increased from US$ 3,331.6 to 4,135.5 in the period of 2015 to 2019, according to the World Bank data. With the increasing per capita income, the spending power of people in Indonesia is also increasing. The people in Indonesia are expected to increase their spending on the grocery products such as beverages. Owing to the increasing population and spending power, the demand for the beverages in Indonesia is also expected to increase, which will fuel growth of the beverage and wine coolers market in South East Asia.

Among product type, beverage cooler segment is expected to dominate the market during the forecast period, owing to rising trend towards alcohol consumption

Beverage segment accounted for highest market share of 56.08% in 2019. The young population have started to tend to prefer exotic and trendy western food and drinks over traditional flavor. Moreover, the alcohol consumption in countries such as Vietnam, Laos, and Cambodia is also high. For instance, in 2017, average alcohol consumed by each person was 8.7 liter and 6.7 liter in Vietnam and Cambodia, according to Coherent Market Insight Analysis. Moreover, wine require coolers for storage. Thus, rapidly growing alcohol industry is expected to propel growth of the beverage and wine cooler market in the South East Asia countries including Indonesia, Cambodia, Vietnam, and Philippines. 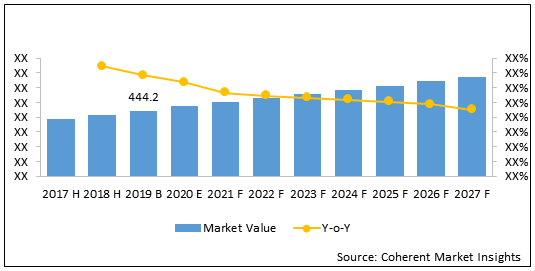 South East Asia beverage and wine coolers market is expected to reach US$ 499.1 million by 2022.

What is the expected compound annual growth rate (CAGR) of the market during the forecast period (2020-2027)?

Growth of modern grocery retailers is expected to drive the growth of the market during the forecast period.

Among product type, which segment held the largest market share in the market in 2019?

Which country held the largest market share in the market in 2019?

Market Overview A freezer is an electric appliance t...