Tissue Plasminogen Activator Market to Surpass US$ 3,491.5 Million by 2027

tPA tissue plasminogen activator is produced by using recombinant technology techniques known as recombinant tissue plasminogen activator (rtPA). Specific rtPAs are tenecteplase, alteplase, and reteplase. These enzymes are used in clinical treatment of thrombotic stroke or embolic stroke. tPA is a drug that dissolves blood clots. It is a thrombolytic agent which can be administrated into the veins.

Rising burden of pulmonary embolism in individuals globally, is expected to propel the growth of the market over the forecast period.

For instance, according to Centers for Disease Control and Prevention report published in 2019, approximately 900,000 Americans were affected due to pulmonary embolism and about 10-20 % individuals die after 1 month of diagnosis. 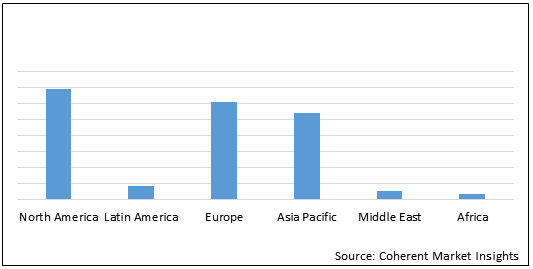 Tissue plasminogen activator is the first and only drug approved by the U.S. FDA in 1996 for the treatment of acute ischemic stroke. The increasing incidence of stroke is expected to drive the market growth during the forecast period.

For instance, according to the World Health Organization (WHO), in 2015, stroke is the second leading global cause of death after heart disease and it accounted for 11.8% of total deaths worldwide.

Furthermore, according to the Centers for Disease Control and Prevention, in 2018, 1 in every 6 deaths from cardiovascular disease was due to stroke in the U.S. 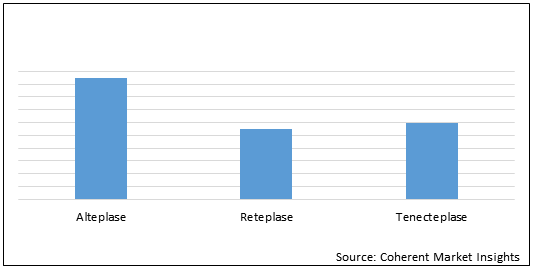 The increasing prevalence of stroke in growing geriatric population is another major factor driving the market size. As per the Public Health England (PHE), around 38% of people suffering from strokes were aged between 40 to 69 years in 2018.

Moreover, tissue plasminogen activator market revenue is witnessing further increase due to awareness about stroke and its symptoms. In 2015, the Centers for Disease Control and Prevention (CDC) stated that around 38% of people were able to recognize the major symptoms of stroke and were treated at the right time.

The tissue plasminogen activators such as alteplase, reteplase, and tenecteplase have wide application for treatment of disease conditions such as ischemic stroke, myocardial Infarction, pulmonary embolism, and deep vein thrombosis. Moreover, many patients suffering from cardiovascular diseases such as ischemia heart diseases, hypertension, and others are at a higher risk of contracting COVID-19. Thus, for the treatment of these symptoms along with COVID-19, doctors prescribe drugs such as hydroxychloroquine, azithromycin, and altepase, and this has had a positive impact on the global tissue plasminogen activator market during COVID-19.

Since the COVID-19 virus outbreak in December 2019, the disease has spread to over 100 countries across the globe and the World Health Organization has declared it as a public health emergency. According to the World Health Organization’s report, the manifestation of coronavirus disease (COVID-19) has resulted in more than 136 million infected individuals worldwide as of April 12, 2021.

COVID-19 can affect the economy in three main ways; by directly affecting production and demand, by creating disruptions in distribution channels, and through its financial impact on firms and financial markets. Due to the lockdown, several countries such as China, India, Saudi Arabia, UAE, Egypt, and others are facing problems with regards to the transportation of drugs and devices from one place to another.

According to the National Center for Biotechnology Information, around 2% to 5% of patients with acute ischemic stroke received rtPA in the U.S. In 2015, Centers for Disease Control and Prevention (CDC) reported around 140,000 deaths due to unavailability and adverse effects of tPA in the U.S.

Moreover, tissue plasminogen activator market growth can be hampered by substitute product approvals by the U.S. Food and Drug Administration (FDA). For instance, after the approval of stent retriever by the U.S. FDA in 2012, the global tissue plasminogen activator market growth was affected, since tPA is not effective for major blood clots in comparison to the stent retriever thrombectomy.

The increasing prevalence of ischemic strokes is expected to drive growth of the global tissue plasminogen activator market over the forecast period. For instance, Institute for Health Metrics and Evaluation report published in 2019, ischemia heart stroke accounted for around 63.5 million (95% UI 57·8–69·0) people globally. Ischemic stroke was responsible for 3.29 million (2·97–3·54) deaths in 2019 globally, with 3.45 million (2·96–4·03) incident cases in males and 4.19 million (3·61–4·91) in females.

Alteplase segment is expected to hold the major market share, owing to increasing product approvals and launches during the forecast period.

North America holds the largest market share in the market