Wildlife hunting tourism has been one of the most controversial topics across the globe, owing to the rising wildlife conservations and environmental strategies. Currently, hunting tourism is considered as one of the complimentary activities for nature tourism companies. Hunting is considered a sport or leisure in most of the European countries in the Nordic region. According to Canadian Federation of Outfitter Associations (CFOA), in 2017, the hunting and fishing outfitting industry contributed over US$ 2.1 billion to Canada’s GDP and supported over 37,000 jobs in Canada. Big game hunting contributes to 72% of the revenue generated from hunting tourism.

According to Humane Society International (HSI), hunters glamorize the killing of an animal to demonstrate virility, prowess, and dominance, which motivates hunters for trophy hunting.

HSI promote animal-free testing, and research, and respond to natural disaster and confront cruelty to animal in all of its forms.

Trophy hunting is defined as the killing of wild animals for the purpose of displaying their body parts, such as the head, rather than for food Trophies include parts such as elephant ivory tusks, rhino horns, and deer antlers, among others that can be mounted on walls or complete bodies that can be formed into life-like poses by a taxidermist.

Moreover, trophy hunters are also motivated by the competitions sponsored by trophy hunting organizations. For instance, a U.S.-based Safari Club International (the world’s largest trophy hunting organization having more than 50,000 members) gives hunting awards in dozens of categories, including the Africa Big Five, for which a hunter must kill an African lion, an African elephant, an African leopard, an African rhino, and an African buffalo. A hunter must kill over 300 animals across the globe to win the highest SCI award, known as ‘World Hunter of the Year.’ Another type of competition is to kill the highest-scoring animals. Trophy hunting clubs record kills that meet certain standards, wherein these standards are used to establish a score for each trophy. Trophy hunters often kill more than one animal of a certain species to achieve a higher score. The competitions and record book scores encourage trophy hunters to kill more animals. These factors are expected to drive the global wildlife hunting tourism market growth over the forecast period. 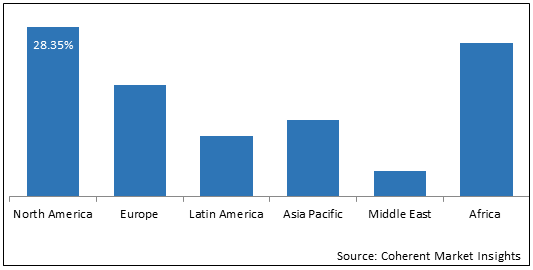 Among regions, North America held a dominant position in the global wildlife hunting tourism market in 2020, accounting for 28.35% market share in terms of revenue, followed by Africa and Europe. North Americans are among the largest wildlife hunters and contribute significantly to the trophy hunting industry. Reports by the National Geographic Society, in 2016, revealed that Americans import over 126,000 wildlife trophies per year. The reports by International Trophy Hunting, in March 2019, revealed that the U.S. imported over 650,000 wildlife trophies in the year 2017 alone. Hence, the rising number of imported game hunting trophies in the region is expected to drive the market growth over the forecast period.

Wildlife hunting destroys animal families and habitats, leaving terrified and reliant baby animals to starve to death and damaging natural ecosystems, which is expected to hamper the market growth of wildlife hunting tourism over the forecast period. In 2017, the Malawian government passed a law to prohibit recreational and professional hunting of protected species. Under the law, exporting trophies is also illegal and tough punishments have been introduced for poaching wildlife or engaging in the illegal wildlife trade.

There are various wildlife welfare organizations such as Born Free Foundation (BFF) and Humane Society International (HIS), among others, which are creating awareness about wildlife conservation and discouraging people from wildlife hunting. Furthermore, BFF and HSI pressures on governments in the United States to prohibit wildlife hunting. Over the forecast period, these factors are expected to limit the growth of the wildlife hunting tourism market.

Sustainable use of nature is an effective way for the protection and management of natural resources and biological diversity. According to several academics, Sustainable wildlife tourism, can provide socioeconomic and environmental benefits, such as satisfying tourists and creating jobs for locals. Sustainable wildlife hunting tourism is a way to maintain and promote biodiversity. Sustainable hunting can lead to preservation of wild animals – even for endangered or threatened species. WWF South Africa (World Wide Fund for Nature) considers hunting as a legitimate conservation management tool and incentive for conservation and regularly engages with major game hunting associations to promote ethical hunting and combat inhumane practices. In South Africa, sustainable hunting has been vital in promoting the recovery of bontebok, black wildebeest, cape mountain zebra, and white rhino by encouraging reintroductions onto game ranches. 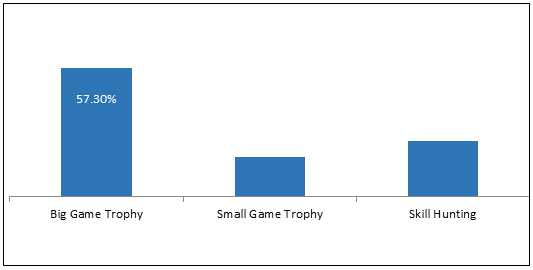 The big game trophy segment generated a revenue of US$ 158.2 Mn in terms of value in 2020 and is expected to generate a revenue of US$ 1,069.9 Mn by 2028, exhibiting a CAGR of 16.7%. The big game trophy has been noted to be one of the costliest game trophies in the global wildlife hunting tourism market. It generally involves game ranching, big game, safari, and indigenous hunting. Wildlife safari hunting has been known to hold a significant share in the big trophy segment and has been estimated to rise in the coming years.  For instance, in May 2021, the South African government announced to ban captive lion breeding. The government further announced to end commercial sale of all lion derivatives that include hunting trophies.

In March 2020, the World Health Organization (WHO) officially declared the novel coronavirus outbreak as a global pandemic. The pandemic has wreaked  havoc on various sectors including the global tourism sector, which has been impacted owing to travel restrictions. According to United Nations World Tourism Organization (UNWTO), between January and May 2020, 100% of global destinations imposed travel restrictions, and 45% totally or partially closed their borders for tourists. International tourist’s arrivals were decreased by 65% in the first half of 2020 and in June 2020, arrivals were down by 93% globally, when compared to 2019. According to the same source, Africa witnessed an overall decline by 56% in international tourism by the end of June 2020 and by 99% in April, May, and June 2020.

Wildlife tourism is a branch of the tourism industry in many countries that focuses on observing and interacting with local animals and plants in their natural environments. Because wildlife is a renewable resource with a surplus, hunters aid in maintaining a healthy wildlife population for the habitat through wildlife hunting.

Wildlife hunting tourism is an effective way to raise revenue and create economic incentives for wildlife conservation. According to the U.S. National Shooting Sports Foundation (NSSF), in 2016, American hunters spent US$ 7.1 billion on equipment such as firearms, ammunition, and archery gears among others. In addition, they spent US$ 3.2 billion on travel to and from their hunting destinations.

Wildlife hunting tourism helps African nations to practice conservation while also improving the livelihoods of rural and indigenous people so that it reduces their dependence on foreign aids. These nations follow revenue-sharing agreements between rural communities, private enterprises, and conservation agencies. According to coherent market insights For instance, According to coherent market insights analysis of 2021-2027, in Zimbabwe under the Communal Areas Management Program for Indigenous Resources (CAMPFIRE), rural communities lease hunting and other tourism rights to commercial outfitters. These communities are then paid 50% of the revenues generated by the tourism activity. In 2019, According to Property and Environment Research Center (PERC, a conservation and research institute dedicated to free market environmentalism), trophy hunting accounts for 90% of revenue generated through CAMPFIRE, which accounted for approximately US$ 11.4 million between 2010 and 2015.

What will the Global Wildlife Hunting Tourism Market size be in 2028?

Hunters often kill more than one animal to achieve a higher score. The competitions and record book scores encourage trophy hunters to kill more animals. These factors are expected to drive the market growth over the forecast period.

Sustainable use of nature is an effective way for the protection and management of natural resources and biological diversity factor is the trend in market.

Wildlife hunting destroys animal families and habitats, leaving terrified and reliant baby animals to starve to death and damaging natural ecosystems, which is expected to hamper the market growth of wildlife hunting tourism over the forecast period

What is the market size?