Press Release: Australia Titanium Dioxide Market is expected to reach US$ 130.0 Million by the end of 2027

Australia Titanium Dioxide Market is expected to reach US$ 130.0 Million by the end of 2027

Titanium dioxide is also called as titanium (IV) oxide with chemical formula TiO. It has a wide range of application in paints, food coloring, and sunscreen products. It occurs in nature as a minerals rutile and anatase and is the ninth most chemical element found in the earth's crust. This metal is commonly found in animal and plant and combine with oxygen to form titanium oxides which are mainly found in waste, sands, dust, and soils. It has a range of application such as paints &coatings, cosmetics, soaps, as a water treatment agents, food colorants, and automotive products.

In 2018, Australia titanium dioxide market was valued at US$ 96.2 million, in terms of revenue and 60.0 kilo tons in terms of volume.

Rising application of titanium dioxide across paints, paper, dyes, and plastic is expected to propel the market growth over the forecast period. Moreover, increasing the disposable income of people in the country is expected to raise the demand for consumer product such as personal care, automobiles, and household product. Aforementioned factors are projected to fuel the growth of Australia titanium dioxide market in the near future.

Rising installation of solar panel in the country as titanium dioxide find application in the solar panel is projected to boost the market growth. According to the Solar Feeds, in 2018, 2 million households in Australia installed rooftop solar panels. It means that one in every five households now have solar power to bring down their electricity bills. If this rate of solar installations remains, the country will reach 50% renewable capacity in 2025. 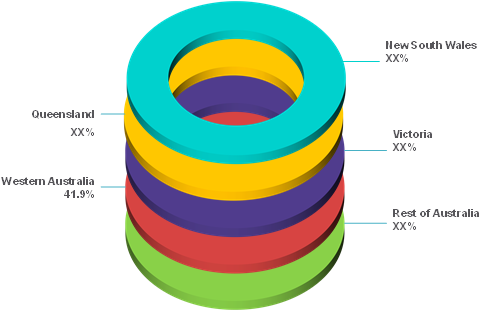 The slowdown of the economy in the country is projected to hinder the market growth of Australia titanium dioxide. According to the World Economic Outlook, The International Monetary Fund predicts that Australia's economy will weaken to 1.7 percent growth in 2019, down a full percentage point from 2.7 percent in 2018. Hence, the slowdown of the Australia economy in the recent few years is expected to restrict market growth over the forecast period.

Increasing the cosmetic and personal care product industry in Australia is projected to propel the market growth of titanium dioxide. According to the report published by the International Monetary Fund in September 2016, in 2015, Australia’s total personal care and the cosmetics market is estimated at US$ 3.4 billion. Imports satisfy over 70% of the domestic market with the U.S. holding the largest share at 22%.

Increasing adoption of advanced technology for the production of titanium dioxide is expected to foster market growth over the forecast period. For example, traditionally sulfate process was used to extract titanium dioxide from its ores but now it has been gradually replaced by chloride process because this process generates a lesser amount of waste, easy recovery, and also has the possibility of chlorine recycling. Hence, advancements in technology are expected to fuel the market growth.

An increasing number of partnerships among major players in Australia to meet the rising demand for titanium dioxide is expected to fuel the market growth over the forecast period. For instance, in October 2018, DKSH and Australian stock listed resources company TNG have signed a term sheet encompassing the full distribution on a global and exclusive basis for TNG’s titanium dioxide (TiO2) production as TiO2 is the most used white pigment worldwide.

The presence of the biggest deposits of titanium mineral in Australia is expected to fuel the market growth of the titanium dioxide. For example, according to Australia's peak research organization, the CSIRO, Australia has the biggest deposits of ilmenite and rutile – titanium's base minerals - in the world. At present, 95 percent of the mineral sand mined is used in an oxide form, the pure white color crucial in products from paint to cosmetics.

Based on mineral grade, Australia titanium dioxide market is segregated into Ilmenite, rutile, and others. In 2018, Ilmenite accounted for the largest market share of approximately 60.0%, in terms of revenue, followed by rutile and others segment. Furthermore, Ilmenite segment is projected to record fastest growth of more than 4.5% during the forecast period (2019 to 2027).

Among region, Western Australia dominated the Australia titanium dioxide market and contributed for the revenue share of 41.9%, in terms of revenue, followed by Victoria and New South Wales. In addition to this, Western Australia is anticipated to record fastest growth of over 4.0% in the forthcoming years.