Beta-glucan is a natural ingredient that is used to provide texture to baked food products. Basically it is a fiber and enhances the nutritional value and dietary fiber content of the food products. Moreover, it acts as a prebiotic ingredient and promotes better gut health. It also offers various health benefits such as regulating blood cholesterol and sugar levels. Furthermore, it also ceases the development of cancer-causing cells.

1)27th May 2020, The  Kemin Industries presented Beta glucan as an immunomodulator Beta-Glucan produced by Euglena which is ‘unbranched 1,3 beta-glucan ‘can be used as a supplement for the immune modulation.

2)9th July 2020, According to the report presented by NCBI, The understanding of the importance of the dietary fibre rich food is increasing, Beta-glucan is being infused with the food products like Oats and pastas for their high fibre rich properties.

3)20th September 2020, Beta-glucan is proven to exhibit efficient antioxidant properties, which address several skin concerns, from soothing and hydrating irritated skin to diminishing the look of fine lines & wrinkles, the 2016 journal on dermatologist treatment states that Beta-glucan is confirmed to be effective complementary treatment for the mild atopic dermatitis (eczema).

Western Europe region held dominant position in the global beta-glucan market in 2020, accounting for 36.7 % share in terms of value, followed by North America and APEJ respectively.

Maitake mushroom growing in the wild in Western Europe, North America Region in a very large quantity. Maitake mushrooms are rich in minerals and Beta-glucan as a main component .Similarly Yeast Beta-glucan (baker’s yeast) which is high in Beta-glucan using for their immunostimulant properties. It also help to increase the resistance to dieses and general performance to human body.

The increasing consumption of bakery food products around the globe is projected to bring new and bring opportunities for the market in the near future. According to the American Bakers Association, total bread and baked goods sales rose 1.5% in 2018, surpassing $59 billion—split between the fresh bakery department and items located in the grocery, frozen, and dairy departments—while in-store bakery grew 2.2% year over year to $13.8 billion in sales, fueled by desserts, sweet goods, and cookies.

Growing demand for beta-glucan based beverages is expected to serve major growth opportunities over the forecast period. For instance, in July 2020, Lantmännen launched fully-soluble oat beta-glucan for supplements and beverages. The ingredient, which is extracted from Swedish, GMO-free, wholegrain oats, addresses major health issues including heart disease and diabetes. It is designed for use in applications such as nutritional supplements and powdered beverages.

Changing fashion trends around the globe are driving demand for cosmetic and personal care products. Water-soluble beta-glucans are highly beneficial for skincare, haircare, and other personal care products as these are water-soluble and have excellent properties such as anti-aging, anti-irritation, film-forming moisturizing, etc. For instance, Ceapro’s CP oat beta-glucan is an odorless and colorless clear aqueous solution, which can be used in cosmetics products to smoothen wrinkles, reduce signs of aging, etc.

Increasing consumption of natural ingredients is one of the growing trends. This is attributed to the growing preference for natural products and beta-glucan has emerged as a preferred choice since it provides several benefits such as supplying energy and enhance the mood in persons during physical or mental stress. Moreover, increasing focus on the expansion of the distributing network for beta-glucan products around the globe is again propelling the market growth of the over the forecast period. 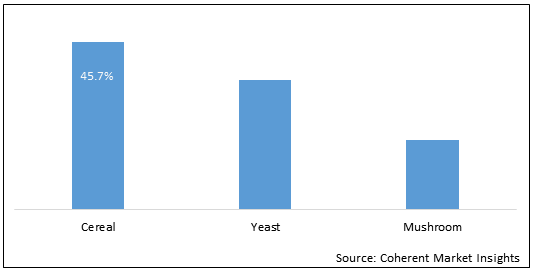 Side-effects associated with the beta-glucan is affecting the demand for the products. This factor is inhibiting the market growth. According to various clinical studies, beta-glucan does have some side effects. When injected into the body, it may cause mild fever, pain at the injection spot, muscle and joint pain, nausea, severe diarrhea, dizziness, etc.

February 2019: Biotec Pharmacon announced that its subsidiary Biotec BetaGlucans has been awarded up to NOK 8 million in a grant by the Research Council of Norway for a project titled “Bioactive wound healing dressing with beta-glucan for treatment of hard-to-heal wounds

daibetes There are a number of foods high in beta glucan including: barley fiber, oats and whole grains, reishi, maitake and shiitake mushrooms, seaweed, and algae. Beta glucan is used as medicine. It is most commonly used for heart disease and high cholesterol.

R&D in beta glucan is expected to propel growth of the global beta-glucan market over the forecast period. For instance, in August 2021, Ceapro Inc. collaborated with the Boston-based Angiogenesis Foundation, a scientific organization, for Beta Glucan and Avenanthramides.

Major players operating in the global beta-glucan market are focused on adoption various strategies to enhance their market share. For instance, in June 2020, Biotec Pharmacon officially rebranded to ArcticZymes Technologies. The name change will also coincide with the unveiling of a new brand identity, a new corporate logo and an updated website (Arcticzymes.com).

What factors are influencing the adoption of beta-glucan?

Side-effects associated with the beta-glucan and lack of proper regulatory norms governing beta-glucan are factors hindering growth of the market.

The cereals source segment held dominant position in the market in 2020.

Increasing demand for cosmetic and personal care products and increasing consumption of natural ingredients are gaining traction in the market.