The global compound feed market size was valued at USD 458,410.80 million in 2021 and is anticipated to witness a compound annual growth rate (CAGR) of 4.10% from 2022 to 2030. Increasing consumption of meat worldwide due to growing demand for food and industrialization of feed livestock sector are prime factors positively shaping growth of the compound feed market. According to the United Nations Food and Agriculture Organization (FAO) the demand for food will grow by 60% between 2010 and 2050. Moreover, the production of animal proteins is expected to grow by around 1.7% per year, with meat production projected to rise by nearly 70%, aquaculture by 90%, and dairy by 55%.

Based on geography, the global compound feed market is segmented into North America, Europe, Asia Pacific, Latin America, and Middle East &Africa. North America is expected to dominate the global market over the forecast period owing to the expanding feed industry market in the U.S. According to the Coherent Market Insights analysis, the US compound feed market was valued at USD 62,163.4 million in 2019 and is projected to reach USD 79,508.6 million by 2025, registering a CAGR of 4.3% during the forecast period. Moreover, key players are entering into partnership for introducing different variety of compound feed in the market. For instance, in January 2020, Micronutrients  USA (Micronutrients) and Kemin Industries (Kemin) partnered to introduce IntelliBond® VITAL 5 Cr, the world’s first nutrition package containing six essential trace minerals, to support the well-being and performance of dairy and beef cattle. 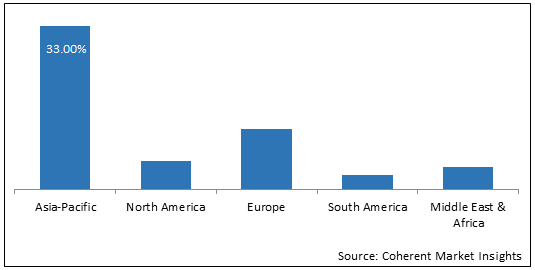 Shifting consumer preferences towards animal-sourced food is primarily fueling growth of the compound feed market. Moreover, increasing consumption of meat, eggs, and milk due to growing awareness regarding health benefits of animal sourced protein is again contributing to market growth. Additionally, growing disposable income, especially in the developing countries, such as India and Brazil is also fostering market growth.

Increasing consumption of seafood such as fish is projected to uplift the market growth over the forecast period. According to the Coherent Market Insights analysis, Fish is sought out as a major source of protein worldwide, accounting for <10% of animal protein source in North America and Europe, and up to 26% of animal protein source in Asia and Africa, thus, processed products are being driven by high accessibility of fish protein internationally.

The growing demand for animal products and processed meat is creating an opportunity for feed manufacturers to increase animal productivity. A rise in demand for various animal products, such as dairy products, milk, meat products, eggs, fish, and other non-food items, has led to the growth in the use of feed additives, thus, propelling growth of compound feed in the animal feed market.

The Indian feed industry is projected to expand at a prosperous growth rate, particularly due to the growing demand for animal-based protein and dairy products in the country. Despite the expanding supply-demand gap in the corn trade, the market is expected to be viewed as a potential investment hub, especially, due to the surging demand from the domestic poultry sector.

The worldwide growing demand for meat, due to the high- quality protein it offer has led to the rising production of sheep meat, which increased drastically from 15,045.41 metric ton in 2018 to 15,343.43 metric ton in 2019 (OECD). Thus, to meet the feed requirement of the increasing cattle, the demand for compound feed has also rise. This is augmenting the overall compound feed revenue.

Growing demand for organically sourced meat, egg, and dairy products is expected to restrict the market growth. According to the Organic Trade Association, the sales of the US organic food market accounted for USD 45 billion in 2017, which is a 6% increase over the previous year and more than double the sales a decade ago.

Fluctuating price of raw materials such as seed and plant leaves is another key factor anticipated to curb the market growth over the forecast period. Also, cost of cereals such as barley, corn, and oats has been increasing which is again expected to negatively impact the market growth. 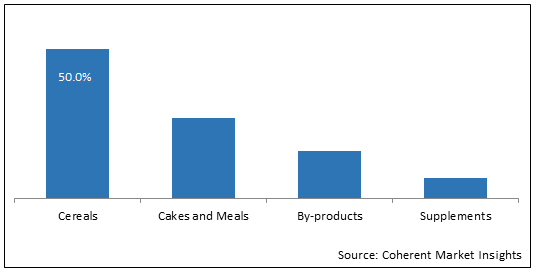 Based on ingredient type, the market is segmented into Cereals, Cakes and Meals, By-products, and Supplements. Out of which, Cereals is expected to dominate the global market over the forecast period. The cereals segment of the compound feed market was valued at USD 218,226.1 million in 2019 and is projected to reach USD 281,256.4 million by 2025, registering a CAGR of 4.3% during the forecast period. Cereals are the most popular and widely used ingredient in compound feed across the world.

Cakes and meals segment is also expected to witness significant growth in the near future. The cakes and meals segment of the compound feed market was valued at USD 119,431.6 million in 2019 and is projected to reach USD 150,637.1 million by 2025, registering a CAGR of 3.8% during the forecast period.

Based on animal type, the market is segmented into Ruminants, Poultry, Swine, Aquaculture, and Supplements. Out of which, Ruminants is expected to dominate the global market. The ruminant's segment of the market was valued at USD 86,061.0 million in 2019 and is projected to reach USD 108,253.0 million by 2025, registering a CAGR of 3.8% during the forecast period. The segment is expected to witness strong growth on the account of the increasing demand for beef and dairy products across the globe.

The global compound feed market is highly competitive. This is attributed to continuous launch of new technologies due to ongoing R &D and efforts by value chain participants. Moreover, key players are adopting various business growth strategies in order to expand their presence on regional as well as global basis. Some of the key players in the global compound feed market are;

*Definition: Compounded feeds are a vital part of the animal nutrition industry, producing more than 1 billion tons annually. Livestock convert compound feed into animal protein and milk, supplying about one third of the world's protein. This number varies widely, however, based on different regional consumption patterns and time periods. Animal protein provides a vital source of nutrients for a growing global population. Agricultural growers and industrial processors generate raw materials for compound feeds.

The term "compound feed" describes a variety of ingredients used in a mix to provide balanced nutrition to livestock. These materials may come from inorganic sources, plant sources, or industrial processing. Common raw materials used for this type of feed include soybean, corn, wheat, barley, and sorghum. Many additives such as vitamins, minerals, and amino acids are also blended in. These ingredients are essential for the proper functioning of livestock.

Growing demand for the higher value and quality foods, such as eggs, meat, and milk is primarily fueling growth of the global compound feed market. According to a survey conducted by OECD-FAO, meat production increased from 317.17 million metric tons in 2016 to 327 million metric tons in 2018.  Increasing consumption of fish and its products across the world is again fostering market growth. Moreover, the industrialization of livestock sector is further projected to propel market growth.

On the contrary, the growing demand for organically sourced meat, eggs, and dairy products is expected to act as restraining factor for the global compound feed market.

Growing demand for animal-based protein and industrialization of livestock sector are fuelling the growth of the market.

Growing demand for organically sourced meat and fluctuating price of raw materials are the major factors restraining growth of the market.