Alcohol is chemically known as ethanol or ethyl alcohol, which is mainly found in wine, beer, and spirit that leads to drunkenness. Alcohol is produced by fermentation of yeast. For instance, wine is produced from the sugar present in grapes, similarly, beer, cider, and vodka are produced from the sugar in malted barley, apples, and potatoes respectively. Alcohol is basically classified as a sedative-hypnotic drug that depresses the central nervous system.

Growth in urban population coupled with the increasing disposable income is projected to propel the market growth of alcohol. Moreover, the advent of variety in the flavor of alcohol coupled with the expanding product portfolio by the manufacturers has further projected to boost the growth of alcohol market. For instance, in July 2019, Coca-Cola (Japan) Co. announced the preparation for its official entry into the nation’s alcoholic beverage market. Further, in May 2018, the company launched a canned ch?hai spirit-based product in the Kyushu region on a trial basis.

Change in demographics coupled with the change in lifestyle is another major factor expected to foster the market of alcohol. The legal drinking age in India varies from state to state. For instance, 18 years in Goa, Uttar Pradesh and Karnataka, 21 in Tamil Nadu and Andhra Pradesh, and 25 in Maharashtra, Delhi, and Punjab. As such, the aforementioned statistics indicate that India is ideal for the high growth of the alcohol market.

Strict government rules and regulations due to the rising number of accidental cases due to over drinking alcohol is expected to hamper the market growth of alcohol.

Increasing implementation of VAT stringent excise duty and government regulations is expected to reduce the demand of alcohol. For instance, governments around the globe tax liquor and related products. They also control and regulate sales. Owing to the local licensing fees and a range of state controls on the trade of liquor, the consumers often end up paying four or five times more than the price at a distillery, that make alcohol costly. Hence this is expected to hamper the market growth of alcohol.

Shifting preferences towards the quality alcohol which also includes liquor with low alcohol. Moreover, rising demand for premium and high prices alcohol due to increasing purchasing power is further projected to propel the market growth over the forecast period. In June 2019, US craft brewer Shipyard has launched Low Tide, low-alcohol pale ale. As the name suggests, Low Tide carries a lower abv, of 0.5%. While leveraging on the growing consumer demand for low- and no-alcohol drinking options. 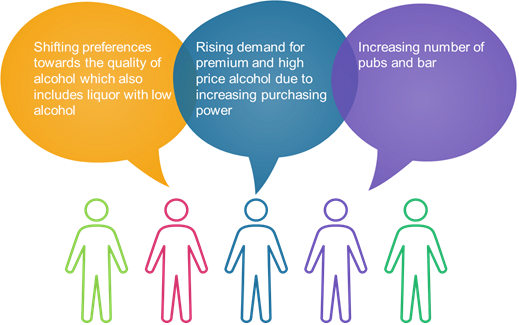 Increasing launch of new products by the manufacturer is expected to offer immense growth opportunities over the forecast period. In June 2018, Gordon's launches Low-alcohol pale ale. The new Ultra-Low Alcohol Gin and Tonic Flavoured Drinks have a 0.5% ABV and it contains 68 calories, compared to a normal gin and tonic which has 219 kcal.

The growing launch of flavored alcohol by manufacture is another major trend that has been observed in the market. In April 2019, Smirnoff launches a new range of fruit-flavored vodka that has nearly HALF the alcohol content of a Red Label. The new range is called 'Smirnoff Infusions' and includes orange, grapefruit and bitters flavored vodka and a raspberry, rhubarb and vanilla one. 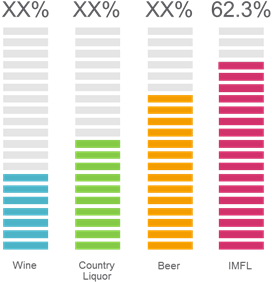 Based on type, IMFL segment accounted for the largest revenue share of 62.3% in terms of value in 2018, followed by beer, country liquor, and wine segment.

Alcohol is a beverage that contains ethanol and contains ingredients such as grains, molasses, and food & beverages. Further, alcohol market can also be segmented into types such as IMFL, beer, wine, and country liquor. Alcohol market is expected to witness a significant growth during the forecast period (2019-27) owing to the increasing disposable income and increasing trend towards western culture in India.

Rising number of millennial population and changing lifestyle patterns is a major driver in case of the growth of India alcohol market. For instance, as per the India Brand Equity Foundation, in September 2018, millennials constituted 47% of the total Indian working population which will lead to an increasing disposable income. Moreover, the increasing demand for cafes, bars, are thereby expected to lead to an increased demand for alcohol during the forecast period.

Among type, beer segment is expected to hold significant market revenue share over the forecast period. This is owing to increasing demand of cereals across the globe due to its easy availability and nutritional benefits. For instance, beer includes various health benefits such as it helps prevent kidney stones, strengthens bones, helps in reducing stress, and lowers bad cholesterol. Apart from the above mentioned benefits, beer is a rich source of vitamin B6. These benefits of beer are expected to lead to an increasing demand for beer segment during the forecast period.

However, stringent government regulations in case of the alcohol market is expected to hamper the growth of the India alcohol market during the forecast period.