Potato is a starchy root vegetable, which is mainly obtained from the plant Solanum tuberosum. Potato tuber is widely processed to get a variety of food products such as chips, fries, flakes, and other convenience food. Potato is also processed for its application as filler, binder, and adhesive by various end-use industries such as paper, textile, and pharmaceuticals. Furthermore, processed potato is used in animal feed and biofuels as well.

Frozen potato segment, based on product type, is estimated to dominate the potato processing market in 2017. Frozen potato is widely used by various quick serve restaurants such as Subway, McDonald’s, and Burger King. Urbanization, modernization, growing population, and increased per capita spending also contribute to the growth of frozen potato segment. Fresh potato is the fastest growing segment by product type of the potato processing market. Fresh potatoes are further processed to get dehydrated potatoes. Dehydrated potatoes also has a significant market share in global potato processing market. Cull potato is used as animal feed for beef and dairy cattle as it is an excellent source of digestible proteins, carbohydrates, and amino acids. Production of bioethanol from potato peels is another growing application of potatoes. Potato starch can be used as an adhesive. Glue, animal feed, and biofuel are important applications of potatoes, which contribute to a significant market share. 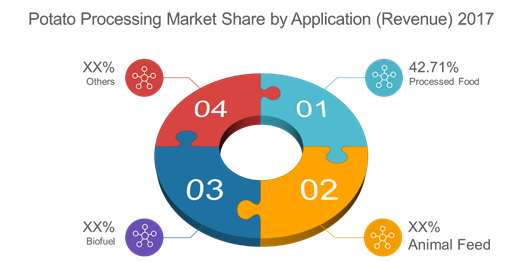 Processed food segment is projected to be the fastest growing segment based on application in potato processing market between 2017 and 2025. The demand for processed food is rapidly increasing due to its advantages such as ease of handling, easy or no cooking, easy preservation, and ease of storage. Processed foods are highly preferred by the consumers as they provide convenient and affordable meal options. Increase in female literacy rate and thereby increase in population of working women is another important factor that drives the market of potato containing processed food.

North America is the second largest market for potato processing and is projected to witness exponential growth over the forecast period.

The potato processing market in Latin America, Middle East, and Africa will experience a significant growth over the forecast period.